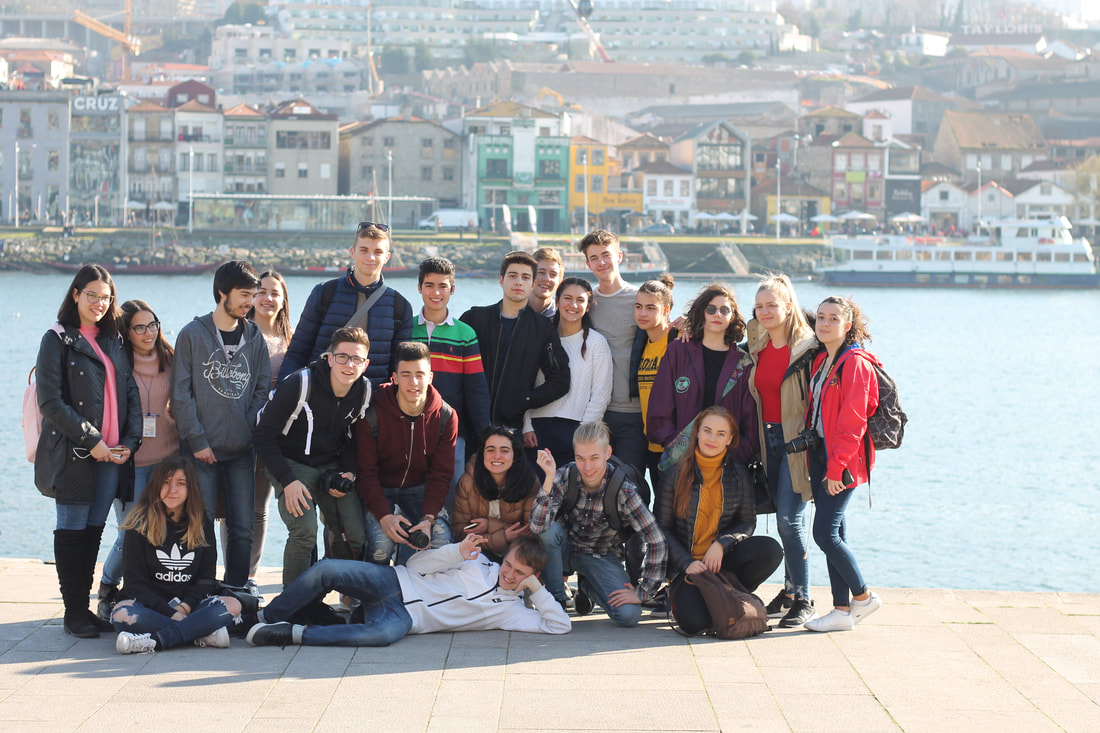 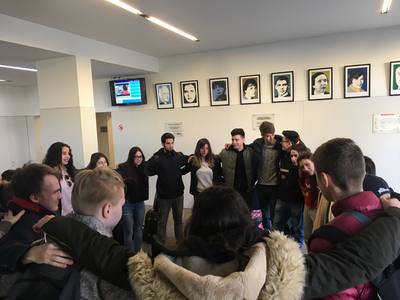 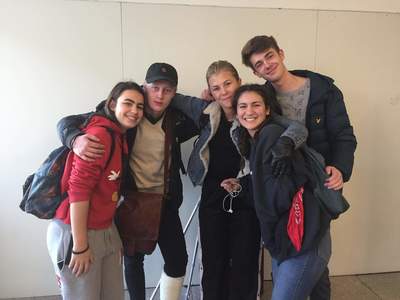 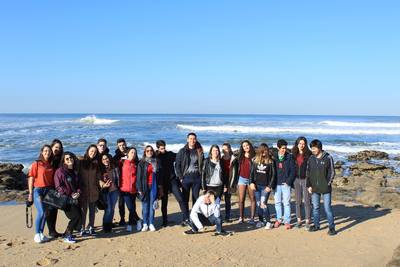 This experience made me grow in many perspectives, and I would repeat everything all over again without any regrets...I've met amazing people and I didn't expect we were going to connect with them so well as we did!
This experience was truly rewarding and I'm thankful I was able to participate in this project! I won't ever forget it! Ines Teixeira, Portugal

This Erasmus+ week in Portugal was amazing. I'm so glad that I had a chance to participate in this project, because this week was really a unique experience that I will never forget. My hosting family was just amazing. They were very kind and made me feel comfortable in their home.  I learned a lot about strategies to find a new job, job opportunities, improved my English… We also got to know their habits, dishes, the city of Matosinhos, visited the city of Porto several times, learned how to dance traditional dances of all six countries and most importantly: I met a lot of new friends. I never expected, that we would develop such strong friendships in a week and it was like we’ve known each other for years not just for six days. But the hardest thing in the end of the whole week was to say goodbye, which was full of tears and hugs.
Miss you all and hope to see you soon!  Tjaša Žagar, Slovenija

I had heard of Erasmus projects countless times, but I had never thought that I would be able to embark on this experience before college. But I'm very grateful to have done it. I can say that last week was one of the best weeks of my life! I learned a lot about other countries and realized that things are not as different as I thought. This week I learned a lot about the working world in 5 other European countries. I had the opportunity to show my country and my culture, but I also had the opportunity to get to know other cultures and customs. We learned how to open our minds to new experiences. We went out, as often as possible. We explored, we wandered, we have seen many places but most of all we had fun together. But it was about so much more than that. I had such a blast getting to know so many other people from all different nationalities, I opened my personal borders and made new friends, from new countries, speaking a whole variety of different languages. It’s a wonderful thing to know I have friends beyond the borders of my country, who I can always visit or come to visit me, with whom I will always have a lot to share even though we don’t see each other every day. In my opinion this Erasmus project gives us a unique opportunity to broaden our horizons. This project exceeded all my expectations and was a very enriching experience. I have won countless friends, not only foreigners but also Portuguese, and have strengthened some friendships. In the end I won a family...  Filipa Cardoso, Portugal

This WoW week went beyond any of my expectations. I not only learned about the world of work in all the different countries, but also about the job opportunities, all the strategies to find employment and the importance of hard and soft skills. But what I treasure the most though, are the friendships we created in such a short amount of time! I could never imagine we would relate to each other so much and talk as if we’d been friends for years!  The WoW night was also such a special event, where we bonded, laughed and (some of us) cried. It was a week full of excitement and true happiness, that I wouldn’t mind living all over again. Sofia Gomez, Portugal

The Portuguese Erasmus + week was one of the most exciting weeks of my life. Everyone was incredible, funny, and had amazing stories to tell about themselves, their countries and their cultures! And, as a host, it was really nice to have the opportunity to show our city around and to enjoy it a little bit more. About the project in general, I think it is a very important experience since it give us the chance to meet new people and new cultures in a way that a simple trip wouldn’t; and it also allow us to get to know more about our own country! And, of course, it’s important to improve our English skills. I really hope up that, in the future, we all meet again. Beatriz Costa, Portugal 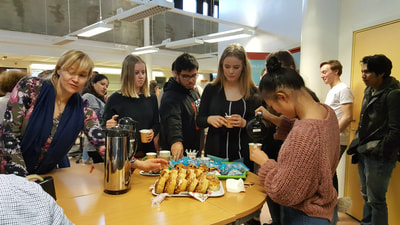 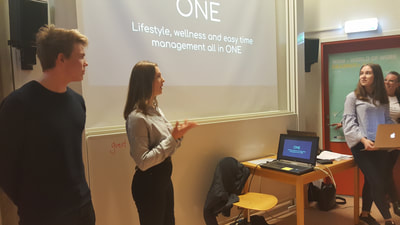 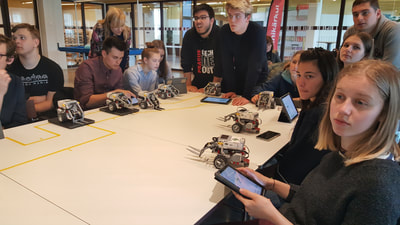 Hello from Mateja, Blaž and Jure!  We are Slovenian participants in the Erasmus +KA2 programme and this year we visited Sweden where we stayed for 5 days. Our expectations were quite lower than the actual outcome. We were all surspised while the week was unfolding.

My experience from Sweden was amazing! It's always interesting to see different versions of reality. My favorite thing about the programme was the fact that students from all over Europe joined. That way I was able to see how the environment affects the individual (some of the students were more talkative, open, while others were more introverted). Seeing how amazing Sweden's school system is, how their lives seem to be 'organized' I realised how important creativity is. I deeply admire their commitment to expressing creativity. I think all school system should include subjects that require creativity. I also loved the fact that we spoke English all the time; it even became so natural to speak English to my Slovenian friends. The programme, all of the activities and the experiences were really breath-taking and I think the Swedish were fascinating hosts.

When I found out  that I will be a part in a international project, called Erasmus+, I was very excited. But first, we needed to do some things. First we had to write our description, make a poster on which we showcased our CV, make a description of our soft skills and make a logo for the project. Then came the time to visit Swedeg. I couldn't wait for the trip beacuse i always wanted to visit atleast one country in Scandinavia. I met a lot of new friends from all over Europe and saw a lot of interesting things. Ve all had a great time and the week went by fast. Our visit of Sweden exceeded all my expectations. I am glad that I could be a part of such an amazing project like Erasmus+.

The Erasmus+ project was probably one of the best things that happened to me. Everything started at school when our Tourism teacher offered us the option to sign in to this project. At first, I didn't think much of it. The first thing we had to do was to create a logo and a poster for WOW. Later we had to do a personal description in English. After a while, we went to different employers and gave them a survey on the importance of certain skills for employment. Finally, we had to rate our soft skills and create a creative CV. I was so happy when I found out that I was chosen. The level of my happiness was undescribable.In the beginning, I didn't really think I would go abroad. I traveled to Sween and loved every second of it. I made new friends and became socially more active. I'm really thankful to everyone who made the experience special and to everyone that gave me the opportunity. The project improved my English and social skills.

​“It is important to experience different kinds of cultures”
Värnamo, Moa Johansson and Leon Björnstedt got the chance of staying at a greek family and go to a greek high school, which makes a huge difference from the swedish life. Both of the swedish students are at home with many experiences richer from the seven days in another country. They learned most from the cultural exchange, to get the chance to experience a different culture up close.

- The first time her mom met me she hugged me and kissed me on my cheeks and forehead, says Moa Johansson.
-In a Swedish society where you live next door to each other, you say ‘Hi’ and nothing more. But in Greece, the whole neighborhood came to greet me, says Leon Björnstedt.
- They had the morning prayer, right before the school day started at eight o’clock, and then with very few breaks (longest was 10-15 minutes, then they would have time to buy a sandwich to eat) the school day were over around one o’clock. My Greek, whom I stayed with, played soccer as well, so the first thing he did was to toss off the bag and go to the gym. After that, he had football training and then he had private lessons to attend to right after, until 10 o'clock, says Leon Björnstedt.
-We Swedes and Finns reacted to how they deal with bullying. The teachers did not take hold of it, but we saw it. They were not physically bullied but ostracized, said Johansson.
- My student said it was very much ‘macho-culture’ among the guys, no one must not prove themselves week in any way. They had to have a position in the hierarchy. The majority of teachers didn't care since they had the mindset of only being there to work, said Björnstedt.
- I think this is very important in today's society, it creates a transparency, that you feel: you do not have the same culture as I, but we can be friends anyway. It is so many divisions and prejudices today, so it's important to experience what it is like in another's cultures, said Johansson.

Erasmus exchange is something that every student needs to experience. It is truly an unforgettable and unique experience that extends our horizons. I’ve met new cultures and languages and learned how to deal with new challenges, that were out of my comfort zone. This is definitely good and positive experience for my future. After the exchange, I realised how differently people live around the world, but the differences make us even more connected, because this is why we are so eager to get to know each other. The Erasmus project hasn’t only given me a beautiful travel, but also something that I will remember Greece forever – new friendships. There were so many intercultural differences between us, and the most beautiful thing was how we managed to connect one another, without prejudice. It was very hard to say goodbye, but this wasn’t the end, but the beginning of our story, which we will continue to create.
Anja Rešetič, Slovenia